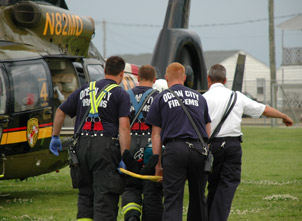 This non-profit, non-stock, charitable corporation was formed in 1980 after a small committee conducted a successful fund raising effort on behalf of the Holly Center in Salisbury. Realizing the potential of this group, I checked the area to determine a worthwhile cause. Obviously, at the time, Atlantic General Hospital had not yet been built and the paramedics were our hospital on wheels.

During the next eighteen years, the foundation’s main source of income was from the fundraiser known as “The Ocean City Character of the Year Party” raising and supplying funds to the paramedics for the furthering of their education and the purchase of equipment that may not have been provided for in the annual budget. Over $800,000 has been spent in this endeavor. Past President Albert Krebs was instrumental in the forming of the perpetual fund which receives 50% of fund raising activities and the other 50% being made available for immediate use. The interest from the perpetual fund may also be used while requested by the EMS. The funds raised are to supplement the monies allocated to the EMS.

On many occasions, state of the art equipment becomes available after the budget has been depleted. That’s where the foundation steps in. The perpetual fund assures us that these additional funds will be available for many years to come. This million dollar foundation is the proud work of many individuals, many hours of fund raising activities, dedicated service without any payroll to any of the Board of Governors who serve without compensation. Legal fees, if any, have been donated, and accounting services are greatly discounted. The responsibilities of the continuation of these efforts fall upon the shoulders of the following:

ARE YOU READY TO HELP OUT THE OCEAN CITY, MD AREA COMMUNITY?

Your browser is out-of-date!